As you know, I created this blog so that I could share my experiences abroad in Uganda. I have shared many stories of my adventures ranging from happy to sad, good to bad, and heartwarming to heart wrenching. Life has a way of bringing about unexpected events, both good and bad, and I think I would be doing myself a disservice if I did not write about my experiences last Tuesday. Whether I’ve come to terms with it or not the bus crash that I was in did happen. While this event does not define my time here or taint the love that I have for this country and its people, it is a small part of my story. I’m not writing about this to one day look back and get upset all over again but to instead look back and realize that I experienced something tragic, overcame it, and eventually grew from it.

Last Tuesday started out like most mornings in Gulu during the rainy season- pouring rain and no power. Unlike most mornings however, I was headed to the bus park to catch the bus for Kampala. I was scheduled to be in Kasambya on Wednesday morning to give a health talk on RHD to the Village Health Team in preparation for the launch of our project there in January. I hopped on the bus, choosing a seat towards the back, and proceeded to fall asleep for 2 hours. Yes, my ability to sleep anywhere includes uncomfortable, scratchy bus seats. As the bus rolled to a stop I realized we were at the gas station, which is a traditional stop for all buses going to or from Gulu. I got out, stretched my legs and before I knew it we were on the road again. Flash-forward an hour and I remember the loudest sound I’ve ever heard, then nothing. I am assuming that I came to after being knocked out anywhere between 1-3 minutes, but your guess is as good as mine. I looked to my right to the see the woman next to me bleeding from the head and I looked to my left out the window to see a few bodies on the side of the road, some moving and some not. When I finally looked down the bus aisle I realized that I was not only looking down the aisle of my bus but also into the bus that we had just collided with head on. I’ve heard of shock but personally never experienced it myself until this moment. I felt nothing. I didn’t realize that there was a golf ball sized lump on my eyebrow, that my eye was partially swollen shut or that I had a concussion. Apparently I caught the entire impact on the right side of my body. I remember crawling out of the narrowed door opening stunned to see the true damage when I emerged from the bus. Although this part of the day is very blurry I remember being extremely frustrated with everyone who came up to me “worried about the Mzungu” instead of caring for those that had suffered life threatening injuries, struggling to hold on. Being the only white person in a crowd of roughly 1,000 people, most of which had gathered to observe the wreckage, I remember walking in circles knowing that I didn’t want to be there. I didn’t care where, just not there. Being far away from both Gulu and Kampala, I knew that I wouldn’t be able to have anyone come get me in a timely manner. Option Z was to flag down another bus but at the time nothing sounded worse. I then saw a Mzungu couple stopped in traffic, walked up to the passenger side and asked if I could go with them. Within 10 minutes of crawling out of the bus, I was with Francesco and Jo, headed for Kampala. 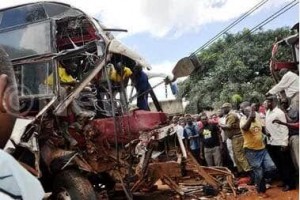 Images from a local paper the day after the crash 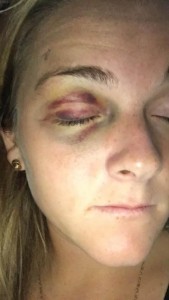 While this experience was awful, I am truly lucky that I met this couple and that they were so welcoming and understanding of my situation. They gave me water, repeatedly asked if I was okay, and didn’t even mind when I hurled out their window. They dropped me in Kampala where I met a friend and then headed to the ITW office. Within an hour of arriving to ITW, I was on the road to Kasambya.

Arriving in Kasambya roughly 7 hours after the event is when I think I truly began to process the severity of the situation. I’ll take this time to apologize to my mom for the shakiest phone call I’ve probably ever made. Thanks for fighting the urge to hop on a plane and get me. Clearly so many what ifs have passed through my head but I can promise you that I am truly grateful to be alive….. and was reminded of that when my coworker woke me up every hour that night to make sure I was still okay. I know how fortunate I am to have come away from that accident relatively unscathed when so many people did not.

On Wednesday Renny, Chris and I headed to Kasambya to give our RHD talk as scheduled. We were without a doubt the moteliest crew to ever give a talk there. Renny was suffering from the flu, Chris with food poisoning and me well…I looked like I had a rough encounter with a gorilla. All things aside I think the workshop was extremely successful and the 19 members that attended seemed very enthusiastic about our project. We couldn’t have asked for a better result. 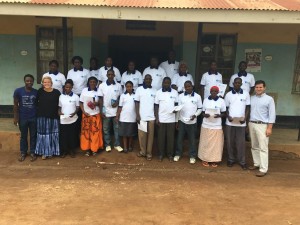 Renny, Chris and I with the VHTs

On Thursday I headed back to Gulu, not on a bus. As much as I thought about staying in Kampala for a day or two longer, the thought of being in Gulu was truly comforting. I don’t think I thought through the idea of being on that road again however, and could have probably benefited from a sedative or 10. I ended up working for a half day on Friday and then took it relatively easy for the rest of the weekend. I can’t say that I feel 100% yet but I’m getting there. I am very happy (I think my parents are happier) that I will be headed home next week just so I can regroup, but don’t worry I’ll be back. I am extremely grateful to everyone who reached out to me during this time and equally grateful that my grandmother never invested in a computer to read this. 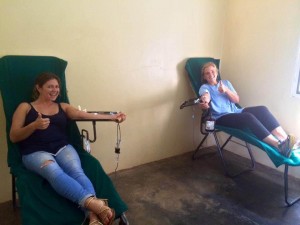