Last week was a really productive and re-energizing week. After the extremely heartbreaking week prior, I must admit, it was much needed. Most of my week was spent in the clinic organizing Registry patients for follow up as well as organizing everything for the 2nd support group. In addition, one of our nurses from Lira was up in Gulu for training so the two of us spent a lot of time using the Vscans to work on our echo skills.

The second support group honestly couldn’t have gone any better and I’m really excited about how everything is playing out. On Saturday my friend Eric dropped a few boxes of supplies at the school at 9:00am and called to tell me that there were already kids waiting. When I arrived at 10:00am over half of the children were already there! All of these children have been out of school since the last week of November and won’t be restarting until after the elections, which are this Thursday. In addition to the super awesome support group I had planned…I think these kids are simply excited about the ability to learn and play with other children their age. After all-isn’t that what being a kid is all about? Over 90% of the participants from the first group attended the second group. In addition we had 4 new children attend, bringing the total up to 50! Never in my wildest dreams would I have anticipated such a positive and receptive response from these children and I am so excited that they love being apart of this group. I am truly inspired by their desire to learn and their thought provoking questions. Let me tell you-these kids are intelligent! 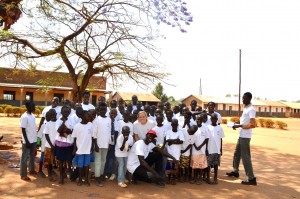 While the kids definitely walked away with new information about their disease, I think one of the most informative parts of the day came after everyone left and I was waiting for Eric to come help me bring the boxes home. Two of the teachers from Gulu Public (the school where the group is held) came into the classroom I was in and I started telling them all about the support group program. They then asked me my name and I responded with “Amy.” Their response-“Emmy? You’re a boy?” Why I haven’t started making names up is beyond me. Both of these teachers then sat down and watched me as I proceeded to spell out Amy vs Emmy on the blackboard and explain that Amy is in fact a girl’s name in the US. It’s times like these that I wish my parents had actually gone through with naming me Michelle. I’ll blame my Dad for thinking that I would have a Lisp and not wanting me to be the subject of teasing as I struggled to pronounce Michelle Scheel… 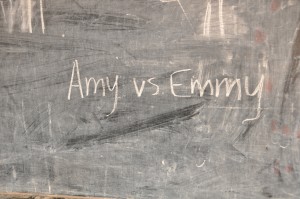 Most important lesson of the day..

On Saturday night my house hosted a Valentine’s Day party, which more or less looked like a Halloween party. A few days before the party we all drew names and were partnered with someone at random. We then had to come up with a partner costume for the party. Arthur and I ended up being Clinton and Trump and I have to say I think we did a pretty great job. In true character, I insulted him all night while he returned the favor. It doesn’t get more realistic than that. I’m not sure how we forgot to take a picture but take my word for it-our costumes were on point.

On Sunday John, Brandon and I set out on a day trip to Aruu Falls, a local water fall about an hour away from Gulu. Now if you recall, it was us 3 who were together when we had bike issues on the way to Fort Patico and this trip was no exception. Brandon and I made it about halfway there when his dirt bike decided to die. After waiting under a tree for an hour hoping it would start, we left it at a local shop and called a mechanic from Gulu to come fix it. Determined to make it to the waterfall, we hired two guys in the town of Paicho (where we broke down) to take us the rest of the way. About 5 minutes into that ride, the bike that Brandon was on died so we once again had to wait until we could find him another ride. Finally 3.5 hours after departure from Gulu we arrived at the falls and let me tell you-it was worth the hassle! We spent the entire afternoon swimming and climbing up and down the falls. I couldn’t help but think of Alex throughout the day, as the last time I hiked up a waterfall was with him and Vanessa in Ecuador. It was such a wonderful way to reflect back on his life and all of the memories that we were fortunate enough to share. As a lover of all things outdoors, I know he would have loved it. 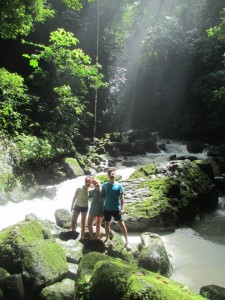 Van, me and Alex in Misahuali

After leaving the falls at around 4:30, we arrived in Paicho to find Brandon’s bike fixed (or so we thought). We made it about 5 miles when his bike died again. This time we were nowhere near a town and ended up calling his mechanic, Emmy (oh the irony), from Gulu. We spent the next 1.5 hours on the side of the road talking about life and watching the most amazing sunset. It’s moments like these that you just have to laugh at your misfortune and enjoy the company that you are with. Emmy finally arrived and got the bike to start after 20 minutes. We made it ½ mile down the road when it died again. At this point we were all just laughing because let’s face it, what else can you do? Emmy gave us his bike to drive back and spent what would end up being two hours trying to get Brandon’s bike back to Gulu. He ended up piling it in a cattle truck…..not going to lie, kind of bummed we missed that. After an 11-hour adventure, the 3 of us made it back to Gulu safe and sound. 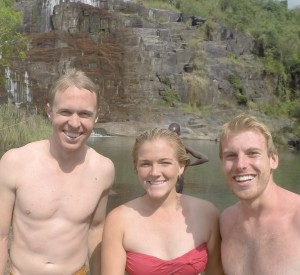 John, Brandon and I at Aruu 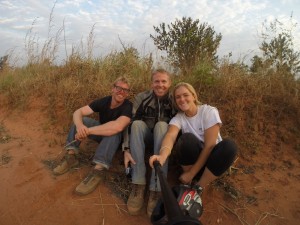 This upcoming week will be a little different than most as the presidential elections will be held on Thursday. Most organizations have mandated that their volunteers not leave their compounds from Thurs-Saturday, so I will be staying at Brandon’s for the end of the week for a very large sleepover with everyone. I wish I could say what I thought was going to happen during these elections but the truth is, I honestly have no idea. I’ll be sure to update you as things begin to unfold.

I hope everyone has a great week!