Go with the flow

I promised I would be back! My time home was very refreshing and I’m so happy I was able to be there for my brother’s big day. Still a little confused about the “compassion” award he won, as I don’t think threatening to leave me during carpool or attempting to drown me in the pool when I was younger classifies as that, but nonetheless I couldn’t be more proud (or happy that he didn’t choose OB/GYN). 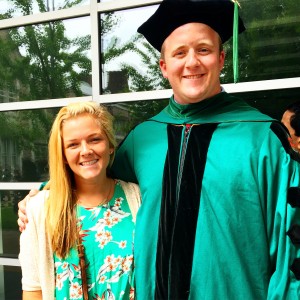 Because there aren’t enough Dr. Scheels in the family…

My trip back to Uganda was a little different this time as it was the first time I wasn’t traveling alone. Alyssa has officially joined our Ugandan team and traveled back with me for her first African experience. Super excited about our adventure, we decided to have a celebratory dinner in the airport and lazily strolled to the line boarding the plane. They then told Alyssa that her ticket had been cancelled and that there was no chance of her getting on the plane….After a long chat with her travel agent and KLM having to call headquarters to “re-open” the flight, we were on our way (and next to each other to boot). Never a dull moment…..and possibly some foreshadowing of how the next few weeks would pan out… 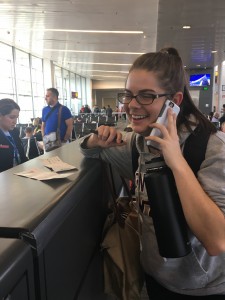 “Please let me on this flight” 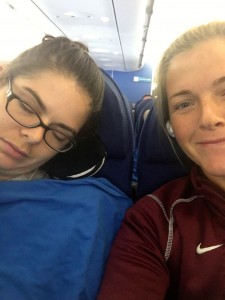 Exhausted by all the excitement

After 24 hours we finally arrived in Uganda (2 hours late since someone mysteriously didn’t get off the plane in Rwanda) but Alyssa’s luggage however, did not. While a bit premature, I’m pretty sure that was the moment I knew she would be okay in Uganda. “The plane is super delayed? Who cares” “My luggage was lost? Can I borrow some shampoo?” You have to learn to go with the flow in Uganda for NOTHING ever goes as planned and right now I can say she is passing with flying colors.

Upon our arrival to Kampala we met up with a large crew from Gulu to celebrate Grace’s birthday before heading to Jinja. Alyssa and I decided to go rafting on the Nile on Friday since most of the group had already gone. While I think almost drowning your new coworker in the Nile might be considered hazing…we had an absolute blast and the group of people in our raft couldn’t have been any more enterntaining. We were both too cheap to buy the extremely overpriced photos but I can paint you a nice picture- Alyssa, me, 2 older men that could barely swim, and our new friends JiWon and Nick, all falling out of the boat with mouthfuls of water….multiple times….We spent the entire day on the water before heading to Nile River Camp to meet up with the 18 person crew that we had from Gulu.

We spent the weekend relaxing at the pool, enjoying each other’s company and eating some great food. About half of the people that came to Jinja left or are leaving this month so it was one final time for us all to be together. I’ve spent the last year with these people, experiencing with them all the good (and bad) that Gulu and Uganda has to offer. I’m very sad to see most of them go but I’m so fortunate for the many amazing memories and friendships I have formed…. and the free places to stay all over the world. I’ve said it over and over again but this experience wouldn’t be the same if it weren’t for the inspiring and supportive volunteer community in Gulu. 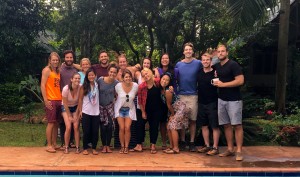 Going to miss these goons

After Jinja we headed back to Gulu in what ended up being a 10-hour car ride. We arrived in the dark so Alyssa didn’t get to truly experience all of the beautiful scenes on the way up North. She finally met her puppy Zazu and experienced her first night in the Gulu heat. The next day we headed to the hospital and I couldn’t have been more excited to see my nurses smiling faces. They truly have become family to me over the last year and going to clinic is such a comforting feeling. I was, however, quickly reminded that life here has continued without me and the many lapses in healthcare are still ever present. As I caught up with the nurses they were joking how the hospital cleaning lady was mad that our patients drop crumbs outside our clinic while they eat waiting to be seen. I joked by saying “ah its probably Lakica, she gets more on the ground than she gets in her mouth”. All of sudden Rose just looked at her feet and with tears in her eyes she informed me that Lakica had passed away while I was at home. She had a tet spell on a public bus and was not able to reach help in time. I spent time at home advocating for Lakica’s surgery and genuinely believe that she would have been operated on in the coming year. I’ve strongly advocated for 3 patients while I’ve been in Gulu and wasn’t fast enough to save 2 of the 3. This one hurt, a lot; but serves as a reminder for how we need to keep trying. We’ll get it right. 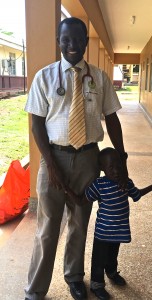 My first day back in clinic with Twalib and Alyssa’s first day seeing patients was eventful to say the least. The first patient laid on the bed, starting seizing and then began expelling “fluids” from every orifice of his body. He finally made it to the lawn where he began seizing again. We had to carry him to the ward because no other health professionals could be found. Like I said, Alyssa just went with it and had both his arms in her hands. After we had him stabilized we returned to the clinic to attend to the 38 patients that had lined up to see Twalib. As we began the echo of the first patient, our trusty echo machine died on us. Sure it could have broken in May so Andrea or my mom could have brought a new one, or while I was home so I could bring a replacement but nope- the very first day I’m back. We then started using Vscans (handheld echos) but the quality/effectiveness for anyone that is not RHD is not very good. This will unfortunately be our practice until we get a replacement in July.

On Saturday I held the 6th and final support group (for the research pilot) and was thrilled to see how many of the kids came out for the final one (and how many had come to every single one). I’m still working on the data but for the most part it seems very positive. While I’ve been apart of multiple amazing projects while I’ve been here, this is the first project that has truly been in my hands, allowing me to use some creativity as I designed the plan for each session. I’m so happy that my hard work seems to have paid off for the kids were begging us to continue the groups and I have been able to see a lot of friendships within the group grow. In a country where feelings are considered taboo, I’m glad these children are able to support each other as they face the many challenges associated with a positive diagnosis. We even made them a video of pictures and clips from the support group, which had them all laughing, and smiling (especially at the photos of Twalib dancing). I’m super excited to be able to continue the groups, especially with Alyssa’s help and next time I’ll know I need to bring a first aid kit…but I won’t go into the details of that little misfortune. 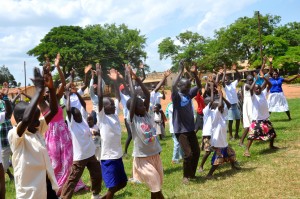 On Sunday night, my roommates and I were curled up on the couch catching up on the Bachelorette (yes, it’s possible to stream trashy TV in Uganda) when we started hearing what at first, sounded like fireworks. It was in fact gunfire and it continued for roughly 25 minutes. My house is a mile away from where it started but it felt so much closer. Long story short a “group” (also termed thugs by the local newspaper) wanted to break a “friend” out of prison and showed up to the police station with AK47’s (which they had stolen from the military armory weeks prior) and opened fired. It soon became a running battle in the streets of Gulu before everything was shut down 30 minutes later. While this group wasn’t targeting civilians, I’m not going to sit here and say it wasn’t scary-it was. At the same time it appears that the threat has been managed and I don’t feel any less safe than I did a week ago. There has definitely been more gun violence in the USA in the past year than there has been here in the last 4. This event did however force us all to think about plans if this were to happen again, which is ultimately a good thing. Most organizations were on curfew all week to see how everything played out and Travis, Austin and Arthur spent the night at our house so we could all be together. Alyssa and I ended up leaving for Kampala on Thursday morning and we are planning to be here all week. The good food, hot showers, gym and constant electricity have been really rough on us but somehow we are surviving. I will be taking Alyssa to the ITW sites for the first time this week and I’m very excited to see our teams at Kasambya and Nawanyago. June has flown by!

Through my mom’s eyes