I have decided that my morning walk to work is my favorite time of day. Its cool, the streets aren’t as busy and all the children are out walking to school. Most of them will run up and say hi to me or just walk beside me staring until we go our separate ways. I think its something about their innocence that I love and makes me want them to stay young forever. That and the fact that it is much more endearing when a small child is yelling hi from their front steps or beside you than it is when a 40 year old man does it, but I digress.

This week when looking over some of our intake forms I added up the ages in my head and started to put together how old some of these mothers were when they had their first child. I have run across multiple 10 year old mothers (with 20 year old fathers….) and it honestly took me a while to take it all in. I’m pretty sure I still believed that “when a mommy and daddy really love each other a stork will drop them a baby” at that age. Unfortunately, that is the norm here and if you can’t afford to go to school you usually begin reproducing even earlier, which continues the vicious cycle of poverty. Most of these mothers usually have between 6-12 children. I think the hardest part has been seeing how much older the fathers usually are than the women and how much they take advantage of women here. There seems to be a general consensus among the women that men get to do whatever they want while the women are supposed to take care of the children, house, and cooking all day. Now I know some of you guys are probably saying “hell yeah” in your heads but trust me, I would never wish this type of controlling relationship for anyone.

This week was also the first time I was able to witness firsthand what happens when RHD goes undetected. One of Dr. Twalib’s patients, an 18-year-old girl, is in heart failure due to the damage that this disease has caused to her heart valves. As much as I would like to be, I know I’m no doctor, but even I could see how extreme the damage was on her echo. Her heart valves simply weren’t closing (not even close), which, in layman’s terms, means blood can flow back from where it came from, in the wrong direction. I watched as she was admitted due to the swelling that she was experiencing all over her body and the moment she realized that this is a life or death situation. Her only hope is that she will be sponsored for surgery in Kampala, however Dr. Twalib says her chances aren’t good. Its moments like these that just reinforce why I am here and why so many people feel so strongly about the research we are doing. As I have mentioned time and time again, this disease can be prevented and detected early and it is heartbreaking to see it develop into such a life threatening condition.

Yesterday we worked in the clinic in the morning (enrolling 4 more families) and then went on our first field trip around 3pm. We went to Fort Patico, which is about 45 minutes north from here. What I took away from the history lesson we received was that Sir Samuel Baker was sent from Europe in the late 1800’s to defeat the Arabs who were controlling slave trade to, you guessed it, the United States (being the only non-Ugandan/American on this little excursion…that was nice and uncomfortable). After walking around a bit we enjoyed a heart healthy lunch/dinner of fried chicken, french fries and mountain dew (I can picture my mom cringing at the thought). Every day I am in charge of hosting a 30 minute de-brief meeting with all of the nurses on how the day went and what we can do better, so we did that sitting in the shade of Fort Patico. By that time it was about 5:30 and I have to say the breeze was very enjoyable. Although the Fort was very interesting, I think my favorite part may have been the drive. I have seen some villages near the town of Gulu, however this was 45 minutes of driving in the country. If you think that mud huts with straw roofs are just something you see in movies…you are very wrong. They are very much present and basically the only type of housing that I saw on this drive. Electricity is not present in these villages and you have to walk (sometimes a great distance) with huge plastic jugs, just to get water. I’m sure you are sick of me repeating myself but I don’t think I can reiterate it enough- be thankful, everyday, for what you have.

The entrance at Fort Patico 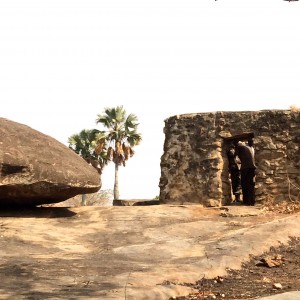 Part of the fort..that’s about as much detail as I can give you

Tomorrow is that last day that Dr. Twalib and I will be in the clinic helping to enroll cases/controls before we head to Kampala for 2 weeks. I feel like I am leaving my child by leaving this project but I have faith in the nurses and our team that everything will get done while we are away. For those of you that didn’t know, I will be headed to Kampala to meet with a team from Childrens National Medical Center in DC. A team comes every year to perform surgeries at Mulago Hospital, so I will be helping them organize throughout their trip and will hopefully get to scrub in on some surgeries (don’t worry M&D, I promise not to embarrass you by fainting this time).

Hope everyone is having a great week and happy hump day!

Rose brought her daughter into work today so I had my very own personal assistant. She doesn’t know any english so that was entertaining

The Pursuit of Happiness