I’m sure I’m beginning to sound like a broken record BUT sorry for the delay. Since I officially left for Uganda a little over a year ago (what!?), my one-year blog subscription expired and it took some time to get it up again. So much has happened over the last week and a half so I’ll jump right in.

On Saturday the 23rd we had our first support group and I couldn’t be happier with how everything turned out. I arrived at 10am (group starts at noon) to find 8 children already there. EIGHT! And here I was worried that children wouldn’t show up. The children started by checking in and making their nametags, which was a huge hit. Most of their nametags have so many stickers on them that you can’t actually read their names but hey they enjoyed it so that’s all that matters. We officially started the group off with a little “aerobics” taught by my friend Eric and then broke the kids into 3 groups. The first group started by filling out baseline data forms, the second group took a quiz about rheumatic heart disease and then took part in an educational workshop, and the third group performed an obstacle course. The kids rotated through each station over 3 hours. Overall we had 46 kids total attend the first group, all of which seemed eager to return this month. The next group is a week from Saturday so I am already busy trying to solidify all of the details for group 2! 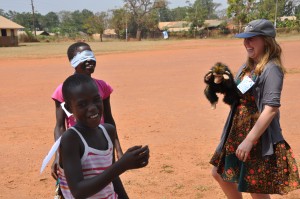 Katie was the final stop of the Obstacle course. The kids had to high-five her puppet monkey to complete the course! 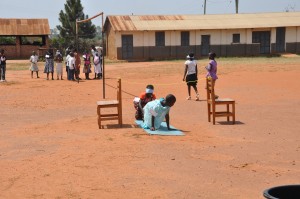 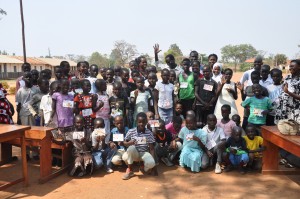 On Saturday afternoon, after the support group, 8 of us headed out to Fort Patico to do a sunset hike. After 2 hours and 2 flat tires later….I finally made it. Brandon, who I had originally been riding with however, did not. He had to ride on his flat tire all the way back to Gulu while our friend John who was on the way picked me up. We made it just in time for sunset and it was such a perfect ending to such a long, amazing and work filled week. 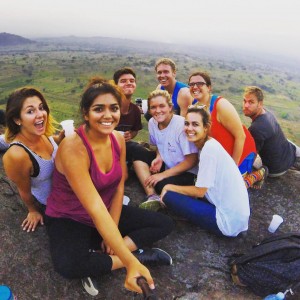 The whole gang at Patico 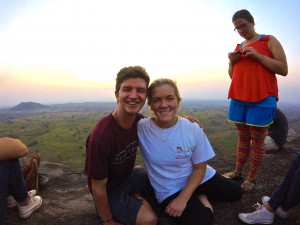 On Sunday 15 of us headed to Chobe lodge in Murchison falls to spend the day at the pool for our final day with Robbie before he headed back to the states. Robbie arrived in Gulu the same week I did last year and we have really gotten to know each other over the past couple of months. He is such a kind and genuine person and was always down for an adventure. There is no doubt in my mind that our paths will cross again but right now the entire Gulu community is definitely missing him (no matter how weird or quirky he could be at times).

On Tuesday I headed down to the ITW house in Kampala to prepare for my visit to Nawanyago on Wednesday and Kasambya on Thursday and Friday. Dr. Okello and I left for Nawanyago early Wednesday morning and spent the day with Henriator, our main research nurse there. We addressed a few minor problems but overall I think everything is going extremely well. On Wednesday night I headed to Mubende where I slept before traveling to Kasambya clinic the following morning. I spent the day with Hakim and Olivia and was super impressed with their work ethic and echo skills. They are more than determined to make sure that we get the numbers we need for this study! On Friday I headed back up to Kasambya with Dr. Okello but we had to cut our day short due to the impending arrival of Mbabazi, a presidential candidate for the current election. While I’m sure things would have been fine, none of us were trying to stick around for the crowds and chaos that would immediately follow his arrival.

Carolina, Arthur and Daron ended up coming down from Gulu to Kampala on Friday evening so we enjoyed some good food and drinks over the weekend before heading back on Sunday. With the upcoming elections, most of us will be staying put in Gulu until the results are out. We don’t anticipate anything going wrong but its definitely much safer where we are than in the capital.

In contrast to last week, this week has just been one of those weeks where everything seems to go wrong and each subsequent event is sadder than the previous one. As they say “when it rains, it pours”. On Wednesday morning I walked into the children’s ward to find Regan, one of our RHD patients who was frequently admitted, covered with a sheet. I didn’t have to ask. I knew what that meant but at the same time I couldn’t, and honestly still can’t, process it. I loved that kid and truly thought that we were going to have the chance to get him the life-saving surgery that he needed. He had been stable the day before and even ate his afternoon lollipop with me, a tradition we started back in December. He has been admitted multiple times however he always pulled through. Why was this time different? I’ve experienced this so many times now and I think I fooled myself into thinking it would get easier. Shortly after Regan’s death we were informed that another one of our RHD patients (Barbara who I have written about previously) passed away in December. We had assumed the worst since we had not seen her since her admittance in November but there was still a small chance that we were wrong. After weeks of trying we finally got through to her mother who said she passed away in the village around Christmas time. As if our day hadn’t been devastating enough, our last patient of the day was a 5-year old-boy with newly diagnosed HIV and TB. Like I said, when it rains it pours.

This morning I woke up ready for a new start when I received the worst, most bone chilling news. Alex, my co-worker during my time with Alma Sana, and more importantly friend, passed away this week at the young age of 25. He was without a doubt one of the most impressive and vibrant young people I have ever been around and his desire to change the world through global health interventions was inspiring. He has truly touched the lives of many people, including my own, and the world will not be the same without him. During my time in South America, Alex hosted Vanessa and I for a week and a half in Ecuador, taking us on the trip of a lifetime. I will cherish those memories forever and always remember our long talks about global health and our dreams of changing the world. In my opinion though, he was already doing that. My heart goes out to all of Alex’s friends and family. Rest easy my friend. Te extrañamos mucho. 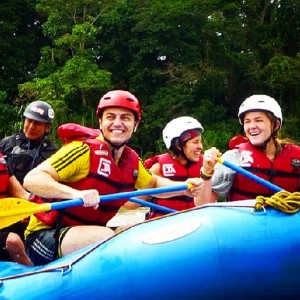 Alex, Vanessa and I rafting down the Rio Napo in Ecuador

“Those who are crosseyed”