I have arrived in Gulu!

(I’ll try and keep this short so you’ll keep reading but there is so much to tell!)

On Monday morning Twalib, the Ugandan doctor who is working on this project, greeted me at my hotel in Kampala and from there we took a car up to Gulu. Most people would not hire a driver like this and would simply take public transportation however that was not an option with luggage and an echo machine.

The ride lasted about 6 hours and it was definitely an awesome way to see and learn about this country. The roads were half paved/half dirt and gravel and there appears to be no road laws whatsoever. Safe to say that I would never feel safe driving here (look mom and dad no more speeding tickets!) We crossed over the Nile River as well which was pretty exciting to see (yea I’m a nerd). This ride also served as a mini-history lesson from Twalib. As many people know, Uganda experienced a lot of turmoil and loss due to the Lord’s Resistance Army. The LRA came to an end about 12 years ago and Uganda has been rebuilding ever since. What I did not know was that the LRA only greatly affected the Northern part of Uganda because the LRA could not cross the Nile. The bridge that we had crossed over on our way to Gulu was not accessible during that time, which is why the brutality was so much worse up north.

As for the “city” of Gulu, it is definitely a different world. I had no idea what to expect before coming here but this is by far the most unique place that I have ever traveled to. Upon arrival yesterday afternoon, Twalib and I headed straight to the hospital to check in with the nurses that will be working on our project. Just seeing the hospital was a huge culture shock in itself. We are working in Gulu Hospital, which is the government run hospital here. This facility is essentially run down buildings with open doors. The surgical wing would remind you of a summer camp cabin with single twin beds in rows (plus a few chickens running around). It was just one of the many reminders I have had in my 3 days here to never take anything for granted.

On Tuesday we began enrolling patients in our study, which was such an awesome experience! As of now we have enrolled two children (who are positive for RHD) as well as their first-degree family members. These families were so appreciative of the work that we were doing even though it may never directly benefit them. The hardest part has definitely been the language barrier. Although all of the nurses speak relatively good English, most of the families coming in speak Acholi. The nurses say “ you’ll pick it up right away” but I’ll keep you posted on that…… With that aside, the nurses are some of the sweetest people I have ever met and just want to help in anyway possible.

And lastly more exciting news- I have made my first friend in Gulu! I am staying at a guesthouse a little more than .5 miles away from the hospital and met a fellow researcher/volunteer during dinner last night. I swear making friends here is like dating but all you want is someone to hang out with. Lars is an anthropology student from Denmark working on his thesis, which focuses on how different people react to trauma. He has been here for about a week and has met a couple of people already so my circle is expanding! We are hoping to get a group together to take some trips on the weekends and it is nice not walking around town alone (apparently walking around with another person that gets just as many stares as you is somewhat comforting). 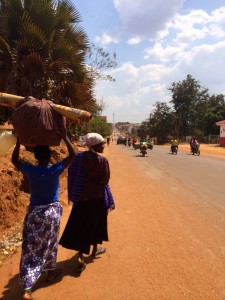 This was my view on the way home from the hospital. This is one of the main roads in Gulu.

That’s it for now!