I hope you all are having a great week-I know I sure am. My workweek technically started on Saturday for support group 3, although I wouldn’t really consider this work-it’s fun for me too! We had 37 kids show up which I was/am very excited about. The first 2 groups were held when school was out so a lot of the kids were still in town. Now that school has started we have lost a few to boarding schools, but all in all I’m very happy with the turnout from this group. The main educational focus of group this week was basic heart anatomy. A lot of these children know they have a “heart problem” but have absolutely no idea what that actually means. To start I held a photo up of the human heart and asked what it was. Most of the students had NO IDEA that it was a human heart. We ended up doing a coloring activity outlining blood flow through the heart and emphasizing that the heart has chambers and valves. At the end of the day the students were asked what they learned and I was thrilled to see that so many kids put “that the mitral and aortic valves are affected by RHD”. We actually had 6 kids show up this week after going to group because they either missed their injections and “didn’t want their valves to get worse” or because they simply wanted us to echo them again so that they could see their valves in person. I think the nurses may have been a little annoyed by the extra work but I was pretty excited to see that the kids are enjoying learning about their condition. 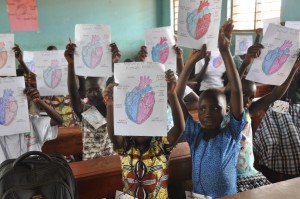 The girls super excited about their hearts! 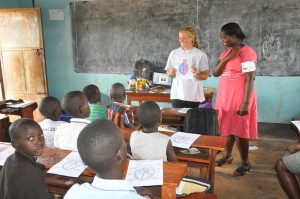 Rose and I teaching about blood flow through the heart

On Sunday night Twalib arrived in Gulu around 7pm and we went through all of the patient echos and ECGs from the previous week so that he could have reports for them the following morning. He has been on a pretty tight schedule, only coming once a week, so we see the patients without him and then have them come back early Monday morning for their official diagnosis. This week we will officially be back on a normal schedule, seeing patients Monday-Wednesday. I like this because it is a lot less hectic, which gives Twalib time to teach the medical students (and me). This week the nurses and I used volunteers from the children’s ward to echo for practice and I was shocked to see that many of them have cardiac issues. Twalib will obviously make the final diagnosis but we believe we found a pericardial effusion, VSD and someone with severe pulmonary hypertension. While it’s devastating to see kids that are suffering from malaria and now possible cardiac issues, I’m happy that they were there for us to echo so we can place them in care. I’ve decided that we should just echo every child that we see-seems doable and sustainable, right?

On Tuesday I had the privilege of visiting Opio at school! That’s right- he has officially started school after 2.5 years of not being able to attend due to illness. The morning started with a tour of the school (which is really amazing) followed by a visit with Opio and time for a few pictures. He started out super excited and then suddenly started crying. Luckily my friend Eric who speaks Acholi had taken me to the school and ended up talking to Opio with the headteacher for an hour and a half trying to calm him down. Long story short Opio was very upset that he had been placed in P1 instead of P2. He felt that he had let his family and I down by not being smart enough to pick off where he left off. Seeing him so distraught honestly broke my heart. While everyone in his life is super proud of him, it’s very hard to explain to a 9 year old how much he has already overcome and how happy we are that he is alive today to receive an education, regardless of what class he is in. By the time we left he was smiling again and gave Eric and I a hug before we left. He then turned to Eric and said in Acholi “ I think I was just hungry.” I seriously love this kid. 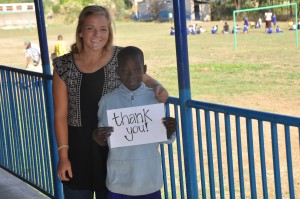 Opio and I would like to say thank you to everyone who has supported his journey!

As for the rest of this week…..it’s just one of those weeks where my roommates and I are constantly reminded that we are in fact living in a developing country and with that comes a few obstacles. I can count on one hand the number of hours that we have had power this week. This morning the power finally came back, ending our 90 hour blackout streak…lets just say that cheers were heard from all over. Now, normally this wouldn’t bother us so much but it just so happens to also be 95 degrees out. I think we have all averaged about 3 hours of sleep because it is just so unbearably hot out and the lack of fans just makes it an even worse reality. In addition, when power goes out for this long that means that every person trying to charge a laptop or phone goes to one of three restaurants with a generator and competes for the outlets…I had to ask someone to let me plug my phone into their computer the other day so that it wouldn’t die on a conference call…….luckily for me, she was super sweet and we actually ended up talking for about an hour after the call because she was super interested in what I’m doing here.

Last night Carolina, Travis, Brandon and I cooked out on the grill and enjoyed a drink on the front porch (in the dark). Minus the mosquitos, 9-10pm is probably the most refreshing time to be outside these days. Tonight a bunch of us will be heading to “Elephante” which is a new restaurant in Gulu. Our friends Quinn and Brittany bought out Sankofa a few weeks back and have been remodeling everything, including the layout, décor and menu, for their big grand opening tonight. Super excited to support their new business and see everything that they have done over the past few weeks!

I would also like to congratulate Paul for matching at Hopkins for his residency in Internal Medicine yesterday! Super proud of you! And I just love, love trying to fill your impossibly large shoes…….I wish I could have been there to celebrate! 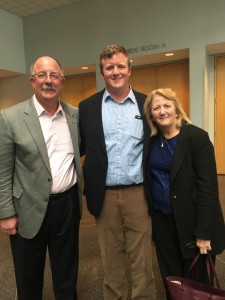 Emmy and Emmy hit the road